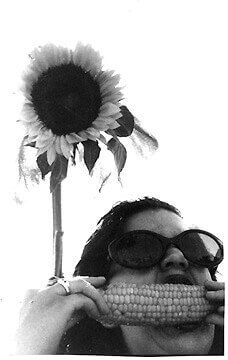 “We started to kiss and then he wanted more.” One womans effort to control her environment as well as her own body, causes her to confront the dangerously close relationship between flirtation, sexuality and assault.

On Corn Smut
“Jennifer Gentile’s Corn Smut, a savvy, sexy lark through an alien environment, offers the deadpan declaration, ‘Some say you shouldn’t wear lipstick in Nebraska’…The seamless flow from short to short reveals an uncanny link in textual and aesthetic concerns as the multicultural group of artists addresses dislocation, colonization, eroticism, community, violence, resistance and hope. It’s a sophisticated, subversive slate of films that both dream of liberation and have the intellectual punch to finesse it.”
– Elizabeth Pincus LA Weekly

“We started to kiss’, a woman says in the voice-over of Jennifer Gentile’s film Corn Smut. ‘Then he wanted more.’ A frightening kind of ‘more’ is, in the end, what Gentile’s small but growing body of film works delivers. Sexual politics are cranked to high volume. Visual excess is Gentile’s stock-in-trade – whether it’s the blood flowing from a woman’s self-inflicted wound or the dizzying shakiness if a driving scene filmed with a hand held camera. Her most recent film, One Eye Leads, uses the story of Saint Lucy, patron saint of the eyes, as a backdrop to sexual turmoil. In this film, as in Corn Smut, women, men, and wounds are elemental. Pain is created through the impersonal juxtaposition of her archetypes. A film/Video graduate of Rhode Island School Of Design, Gentile also attended Brown University (in advanced acting and directing) and City College of San Francisco(in electronic music composition). She’s worked with the Complex Corp. in San Francisco, Metro Films in Los Angeles, and the Bay Area Video Coalition in San Francisco. It’s the ability to know what’s worth arguing about – to distinguish the objects from their owners; to take dark cultural motives out of an individual context of systematic injustice – that makes Gentile’s work rewarding.”
– Susan Gerhard San Francisco Bay Guardian, September 1993