Isabella Holding A Pot Of Basil 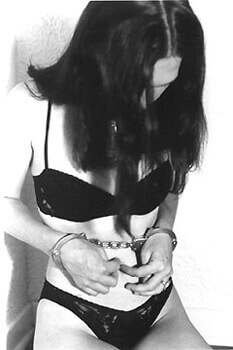 Five quirky tales inspired by Baccaccios Decameron, are retold to reflect a gritty, harsh view of women who suffer at society’s hands. Each short fablelike vignette is narrated by a different woman to the point of absurd distortion. The stories explore such issues as hypocrisy, isolation and identity. Isabella And The Pot Of Basil is a painting by J.W. Alexander(1897) based on the poem by Keats, Isabella or The Pot Of Basil, originating from one of the hundred tales in Baccaccios, DECAMERON.
Funded by a personal works grant from the San Francisco Film Arts Foundation.

A Tongue Of Her Own:1886-1996
” At the other extreme, Jennifer M. Gentile’s experimental film Isabella Holding A Pot Of Basil shoots down religion, men, and sex while exploring such issues as hypocrisy, isolation, and identity. Comprised of several short stories within a short story, Isabella is a gritty, harsh view of women who suffer at society’s hands. One vignette follows the travels of a young girl who seeks religion but is seduced by a monk. He tells her that his penis is the devil, her vagina is hell, and that in order to send the devil back to hell, she must have sex with him. Wanting to stay true to her newfound faith, she decides to make a career of sending the “devil back to hell”, but is ultimately punished by society for “the good of God”. Isabella combines some bizarrely intriguing visuals (the tentacle of an octopus becomes quite phallic)”
– Lea Russo Los Angeles View , March 1996

Film Arts Foundation Festival 1994
“Jennifer Gentile’s new film Isabella Holding A Pot Of Basil , is a vibrant and playful piece that threads together several short, fablelike vignettes. Perhaps real, perhaps imagined, these stories of various women’s experiences have been told and retold – to the point of absurd distortion. The images, like the stories, are a strange but rousing mix of abstract whimsy and true discomfort, with the camera swinging and jumping across a pot of stewing tomatoes, a woman in handcuffs, fingers picking through a dew-dropped produce section, and a woman cutting the nipples off a toy dog.”
– Kurt Wolff The San Francisco Bay Guardian, November 1994